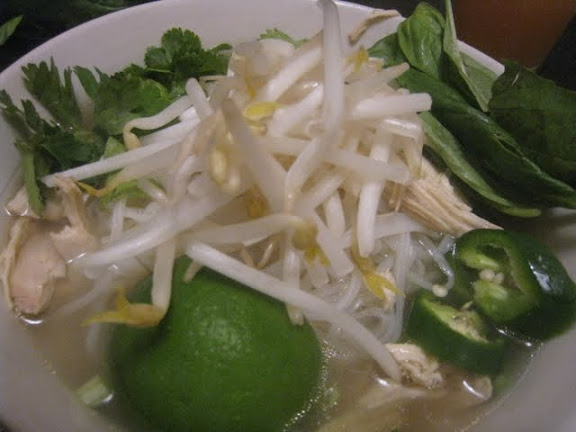 Well it’s no secret that chicken noodle soup is good for you.  It’s a basic comfort food that has been enjoyed by millions of people in many countries for hundreds of years because it’s cheap, hearty, heatlhy, and delicious.

Sometimes called “Jewish penicillin”, chicken noodle soup is even a traditional remedy for the common cold.  What could be better than a big bowl of steaming hot soup when you’re feeling ill?! Well, I can’t think of anything that I would rather eat when I’m cold, tired, hungry, feeling sick, or really hung-over than chicken noodle soup.  In the last few years though, my love of chicken noodle soup has evolved into a love of a chicken noodle soup from Vietnam called pho ga.  (Pronounced “fu gah”).

In San Francisco, we are fortunate to have a ton of fantastic pho restaurants to choose from.   But I know that in other parts of the country, there are not as many Vietnamese restaurants nearby.   Truth be told, I myself had never tried or even HEARD of pho ga until I moved to San Francisco.  But even if you don’t have a Vietnamese restaurant in your neighborhood, there’s no excuse for you not to get to try pho, because you can easily make your own at home!  Hopefully, you will love it as much as I do. 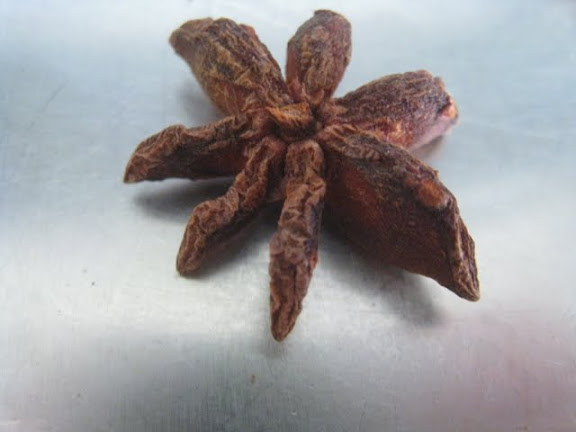 I did some research, and this was the best and easiest recipe for pho ga that I could find online.  http://steamykitchen.com/139-vietnamese-chicken-noodle-soup-pho-ga.html .    I only wish that the author used a few more pictures so I would have had a better idea of what a properly charred onion and ginger look like…

Luckily, I found another website that had some photos…  http://vietworldkitchen.typepad.com/blog/2007/06/chicken_pho_noo.html   Unfortunately, I found these pics AFTER I had already cooked my ginger and onion, so mine were not quite black enough, even though I broiled them for almost 30 minutes.  I also didn’t remove the cooked ginger skin as much as I should have, but the end result still tasted wonderful.   Besides, practice makes perfect!  So I hope that my next batch turns out even better.

I ended up adding some kosher salt, and using a lot more fish sauce than the recipe called for because I wanted the broth to be saltier.   Of course, this is all to taste.

From what I’ve read, the key to making a good, clear broth is to par boil the chicken first to remove the impurities, and then to scoop off any “scum” that floats to the top of the broth while it’s simmering.    I don’t know if it was because I used a good quality chicken, or what, but I didn’t have much “scum” to scoop off the top.   There wasn’t much fat in the broth either after it cooled, so I didn’t end up needing to scrape much off of that.   My broth turned out clear and flavorful though, so I will use the same method next time.

I also think the next time I make this, I’ll broil some garlic cloves along with the onion and ginger for an even more delicious broth.   All in all, it was a very successful first attempt at homemade pho ga.

(B) Accompaniments at table

1.) Place ginger and onion on a small baking sheet. The top of the onion should be about 4? from the oven’s heating element.  Set to broil on high for 15 minutes. Turn the onion and ginger occasionally, to get an even char. The skin should get dark and the onion/ginger should get soft. 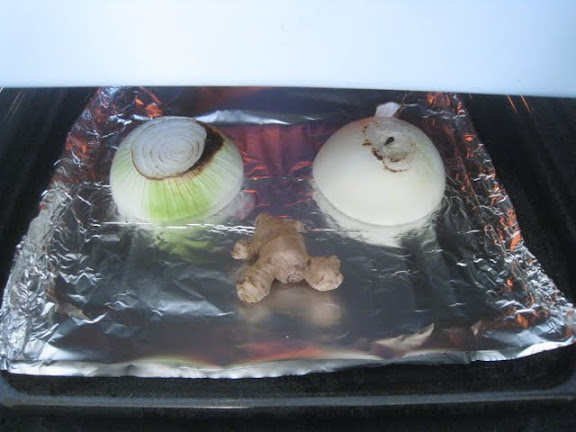 Onion & Ginger (about to get their char on) 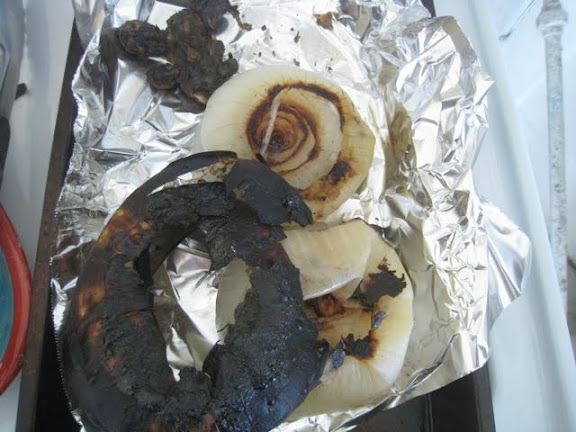 2.) After cooling, rub to get the charred skin off the onion and use a butter knife to scrape the skin off the ginger.  Slice ginger into thick slices. 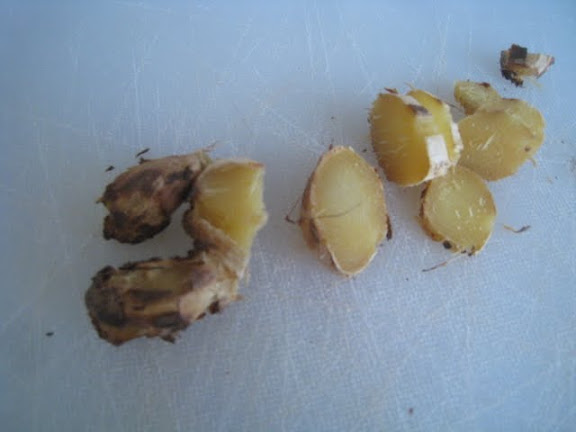 3.) In a large stockpot, fill with water and boil. 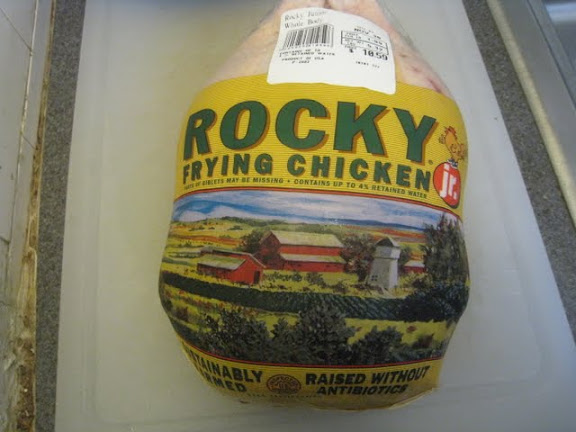 4.) With a sharp cleaver (or very sharp fillet knife), carve the chicken breast meat off and reserve. 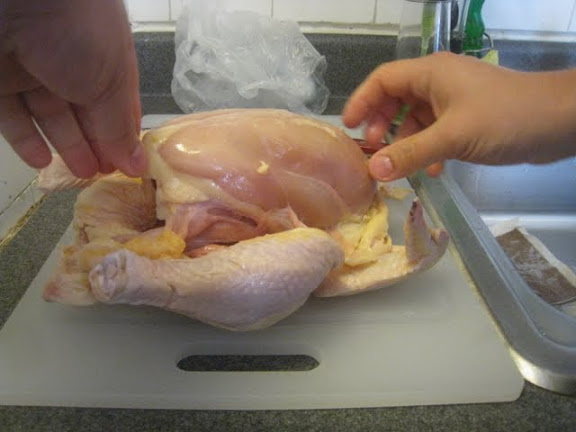 5.) With the rest of chicken, whack hard through the bones to get sections about 3″ big. The more bone that is exposed, the more marrow that gets in the broth (translation: rich, flavorful).  You can even whack several places along the bone just to expose more marrow. 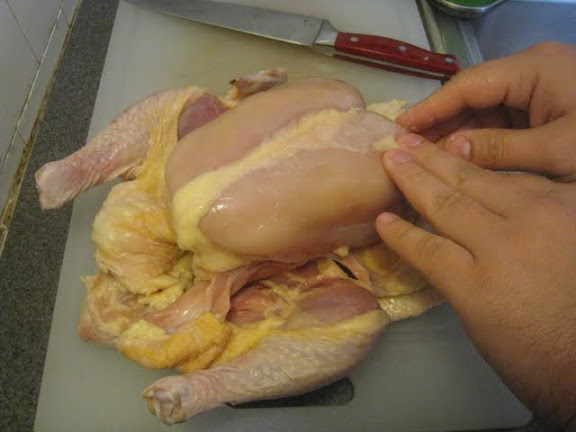 Cut the chicken into big chunks

6.) When the water boils, add chicken sections (not breast) and boil on high for 5 minutes. You’ll see lots of foam and “stuff’ come up to the surface. 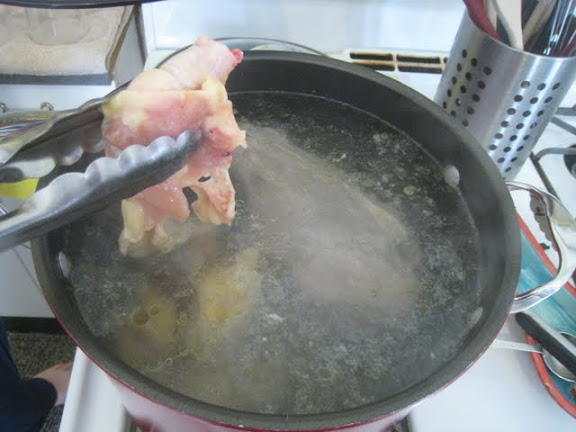 Par boil the chicken first to remove the impurities

7.) Drain, rinse your chicken of the scum and wash your pot thoroughly. Refill with about 4 quarts of clean, cold water. 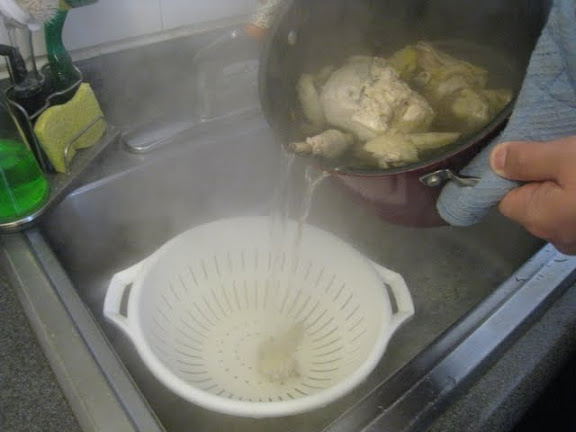 8.) Add chicken, chicken breast meat, onion, ginger and all of (A) in the pot and cover. 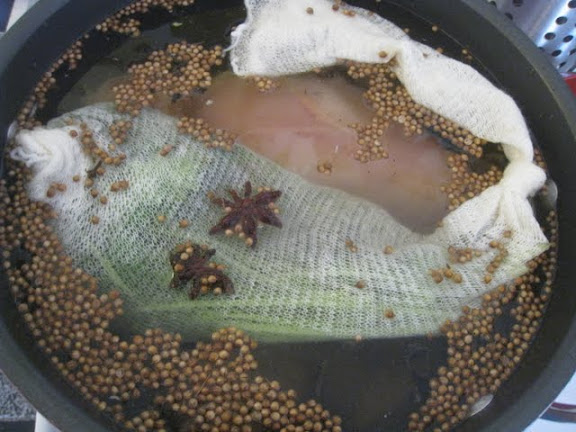 Refill pot with cold water and add chicken, and all spices from (A)

9.) Turn heat to high – let it come to boil, then immediately turn heat to low. Prop lid up so that steam can escape. 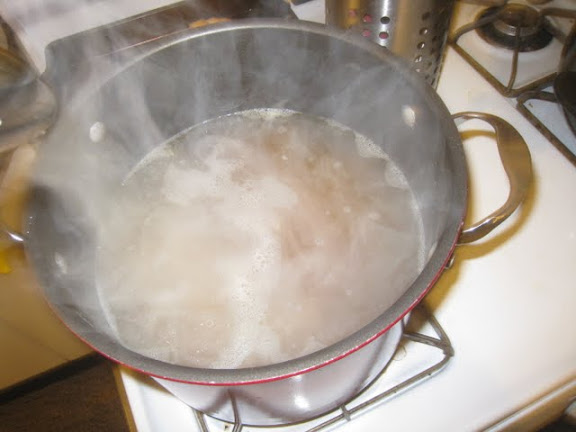 10.) After 15 minutes, remove the chicken breasts, shred with your fingers when cooled and set aside (you’ll serve shredded chicken breast with the finished soup). 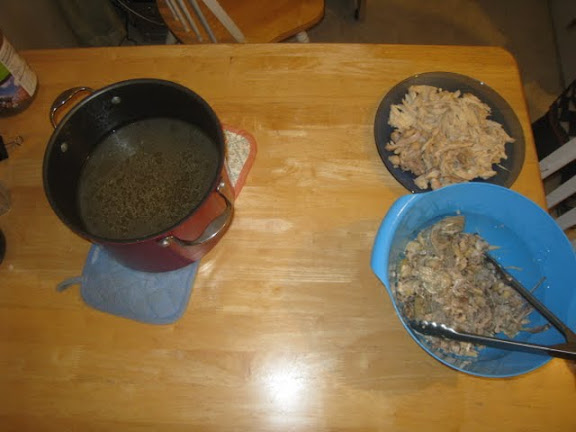 11.) With a large spoon, skim the surface of any impurities in the broth. Skimming every 20 minutes ensures a clear broth. Simmer a total of 1-1/2 hours.

12.) Taste and adjust seasoning with more fish sauce and or sugar.

14.) Prepare noodles as per directions on package. 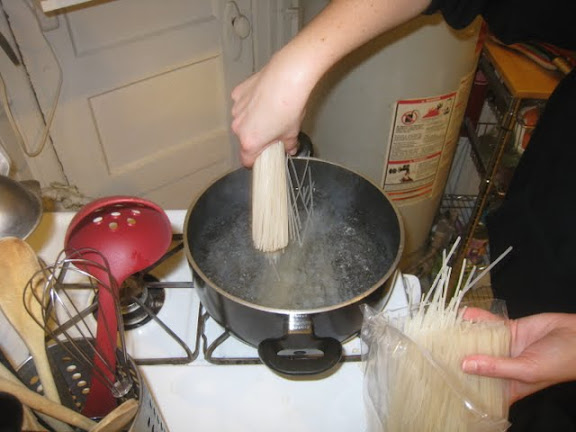 15.) Ladle broth, add shredded chicken breast and soft noodles in each bowl. Have (B) ingredients set at table for each person to add to their bowl. 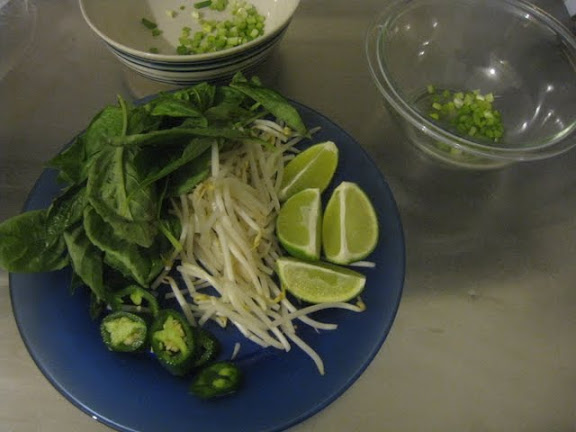 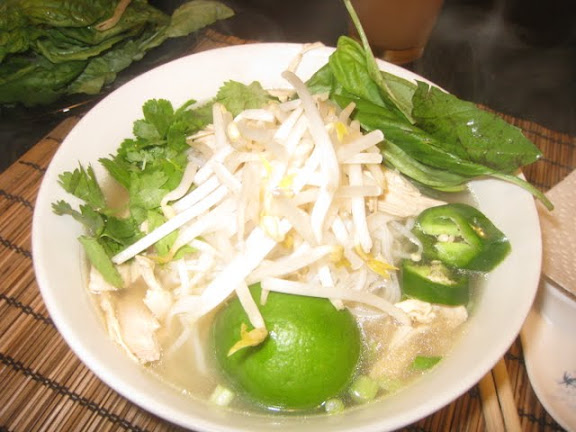