On Sunday morning before we were to head out to Golden Gate Park for a nice sunny day of House music, drinks and dancing in the park, I decided to make us breakfast.

The day before Deanna made a salad that called for some skirt steak so there was some of that leftover that I thought would go well with breakfast.

First I took one large Idaho Russet Potato and grated it into hash brown style, with the big grater. Then I soaked the potato gratings in a bowl of cold water. By doing this it makes them more crisp and removes some of the gummy starch that is there. I rinsed them a few times until all the cloudy water was gone. I’ve also read that it reduces the levels of Acrylamide, which has been known to cause cancer in some animals, but who really knows what it means to us?

After I had the potatoes set aside and soaking I diced up some green onions and added them in a bowl with some red onions I had already chopped up and set aside.

Then I drained the potatoes of their water and patted them dry with a paper towel or two. I added the onions together with the grated potatoes and mixed them up well with some garlic salt and lemon pepper seasoning.

I heated a pan with some olive oil and when the oil was hot through the potato mixture in the pan. I always start with the hash browns when cooking breakfast because they take longer to cook. 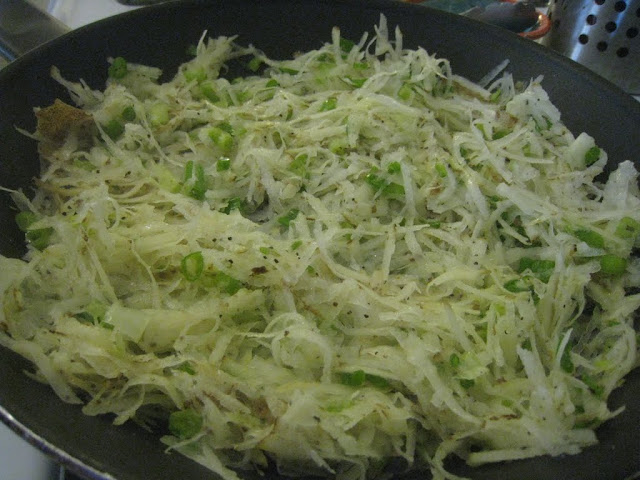 I then took at the remaining skirt steak I had and patted it dry and seasoned both sides with some Montreal seasoning. Nothing fancy. When the potatoes reached about half way done I threw the steak into a med-high heat pan with olive oil in it. It is important to have your meat patted dry to avoid steaming the steak when you put it in the pan. I recently read a blog about someone who was using a “salting” technique to make choice cuts of meat into more prime tasting meat. I will probably try this method soon. You can read their blog here. 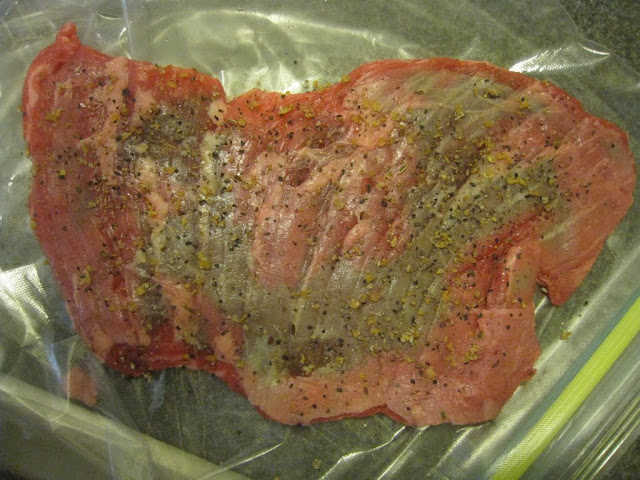 You only want to flip steak 1 time. I know Deanna likes her meat well done, so I let it cook for about 7 minutes on one side and flipped it over. At that time I began frying some eggs in another generously oiled frying pan.

So at this point I had my hash browns flipped over, my steak flipped over and I was frying 2 out of the 4 eggs. It all came together perfectly and was plated at the same time and at my preferred temperature…. hot. 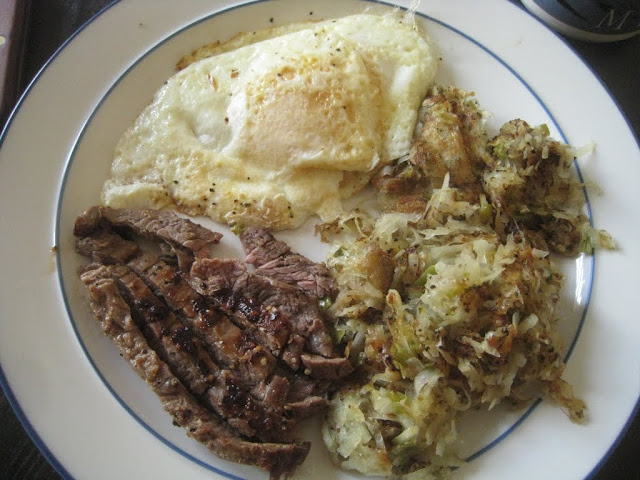 Eggs and Steakey and Hash Browns.

I love cooking breakfast. I don’t know why that is, but I do. I think it’s the thing I cook the most. I think it’s because there are so many ways to change and add to such a few ingredients. So, you’ll see lots of the same things on here probably. A lot of omelets, egg scrambles, potatoes, etc. etc. etc. I’m still trying to make my own Eggs Benedict, so stay tuned for those disasters and triumphs as they come.